, /PRNewswire/ -- Slotomania®, the world's #1 play-for-fun slots game* from ®, has hit the road to meet players as its team tours southern states in the by bus. The tour is a unique opportunity for Slotomania's player community to meet the creative brains behind their favourite free-to-play slot game, loved for its striking graphics and thrilling gameplay. 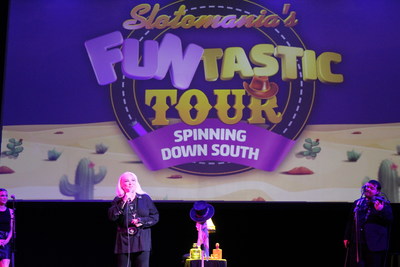 The Slotomania team has taken to the open road to bring players together for fun; just as it does through the games on its app. As a special surprise, Slotomania players attending an event in on 18 June were treated to an appearance by none other than country music royalty and entertainment icon . Tanya, a two-time -winning singer who has released 25 studio albums since her breakthrough in the 1970s and charted hit singles in five consecutive decades, took to the stage for an exclusive performance before meeting and greeting fans for photographs.

About the Slotomania Southern Tour

As part of its unique tour, Slotomania will assemble members of its player community for parties in cities including , , and . Fans are encouraged to look out for the Slotomania tour bus, pictured above, and to share sightings with the team using social media.

Tanya's remarkable performance delivered exactly the sort of thrill and surprise Slotomania always seeks to provide for its players, and the game has proven to be a popular choice for world renowned celebrities to partner with. Recent collaborations have included transforming actress, , into Captain Slotostar for a stunning commercial backed by facial motion capture technology. Other collaborators included the legendary as an animated talking finger.

Launched in 2011, Slotomania was one of the first free-to-play social casino games. For over a decade, with the support of its massive global community, the game has grown to become the #1 top grossing play-for-fun social casino app on Google Play and the App Store**.

, Slotomania's General Manager, comments: "This bus tour has been a great way for Slotomania to engage directly with some of the most devoted members of our community, and it is very exciting to see so many people turn out across the whole tour to share their love for the game.

"Our whole team works tirelessly to constantly bring Slotomania players the level of fun and excitement they have come to expect from us over the years, whether that's inside or outside of the app, and having a legend like Tanya perform at one of our events has definitely been a highlight. While we are digital at our core, we are more than just a game, and there is nothing more rewarding than connecting with our players in person through activities such as this bus tour. We hope everyone who has participated has had as much fun as we have!"

Slotomania is available to download for free on the and Google Play.

Slotomania is the #1 play-for-fun slots game from , which is a subsidiary of Playtika Holding Corp. (NASDAQ: PLTK). Slotomania is different – it features free slot games with crazy graphics, top of the line sound effects, and hundreds of variations to choose from, with new features every month. The free slots experience is played by millions on the web, Facebook, iPhone, iPad, Android, Amazon and Windows Phone.  Slotomania games are available across all devices from PC to Tablet and cell phones, a fantastic opportunity for people who want to play the latest slots games on the go. Although it replicates Vegas style slot machines, there are no cash prizes and Slotomania's focus is on exhilarating game play and fostering a global player community. Slotomania aims to provide fun & excitement and can be played anywhere.

(NASDAQ: PLTK) is a mobile gaming entertainment and technology market leader with a portfolio of multiple game titles. Founded in 2010, was among the first to offer free-to-play social games on social networks and, shortly after, on mobile platforms. Headquartered in , and guided by a mission to entertain the world through infinite ways to play, has offices worldwide and employs over 4,000 employees.

A defining voice of music and a modern-day legend, is a two-time GRAMMY® winner who continues to inspire artists today. Born in , Tanya had her first country hit, the classic "," at the age of 13 in 1972. Since then, she has become one of the most admired and influential artists in country music history, amassing 23 Top 40 albums and a stellar string of 56 Top 40 singles, ten of which reached the No. 1 spot on the Billboard country charts. Tanya's indelible songs include some of country music's biggest hits my such as the aforementioned "," "Soon," "Two Sparrows in a Hurricane," "It's a Little Too Late," "Trouble," " (When I Die)," "If It Don't Come Easy," "Strong Enough To Bend" and many more. Tanya is also the recipient of numerous awards, including two CMAs, two ACMs and three CMT awards. In 2020, Tanya received two GRAMMY® Awards for Best Country Album: While I'm Livin' and Best  Country Song: "Bring My Flowers Now." In the fall of 2020, Fantasy Records released – Live From The Troubadour on , the one-year anniversary of Tanya's historic, standing-room only set from which it originates. Tanya was in the midst of resurgent visibility and acclaim generated by her and Shooter Jennings produced While I'm Livin' album released two months earlier – so the brief stand in front of the tastemaker crowd took on a palpable air of significance. For more information on Tanya, merchandise and more, go to TanyaTucker.com.

*According to data.ai, Slotomania is the #1 Slots game by worldwide downloads and consumer spend across iOS and Google Play and by average smartphone monthly active users (2021). 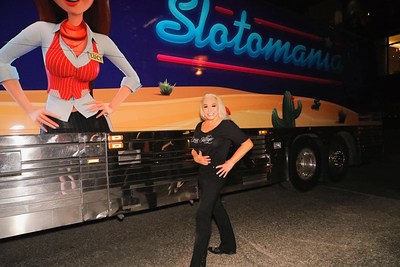