, /PRNewswire/ -- World Series of Poker®1 (WSOP®), a ® studio and the world's no. 1 play-for-fun poker game2, is launching a pioneering new initiative that will see 14 social media influencers compete to be crowned WSOP® legend.

This brand-new campaign will launch the first of its many phases across the US this week, in which the influencers, split into five teams, will be paired with real life WSOP® mentors to master the game and become poker legends!

The path to becoming a WSOP® legend

In a special one-off event, WSOP® will unveil the identities of the mystery influencers live on Instagram from this week. Viewers will have the unique opportunity to watch as the invited influencers open their secret WSOP® boxes to reveal their competitors, react live to their competition and rate their own poker skills.

The influencers – from a range of content realms including automotives, comedy, gaming, filmmaking, sports and fitness – will be coached by some of the best WSOP® players in the world and strive to learn all the tricks and techniques behind the game. In December, the influencer teams will compete against each other face-to-face at an undisclosed location in the US.

WSOP® will also take poker fans on an amazing #RoadToTheTable with live videos and exciting opportunities to interact with their favourite WSOP® legends and influencers alike. The free-to-play poker game is already loved by millions of players around the world, featuring countless exciting game modes, tournaments and special events. 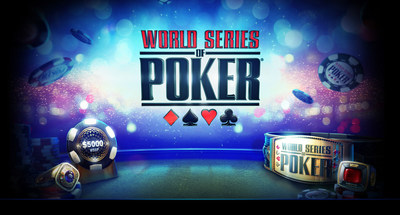 Commenting on the campaign, General Manager of WSOP®  said: "We are thrilled to be launching this unique 8-month long campaign with 14 popular influencers from a wide range of backgrounds. We really want to bring the love for poker and WSOP® to a wider audience and show people just how much fun playing poker can be. We hope that our loyal WSOP® players are excited for this new adventure and that they will pick up a few new poker skills and tricks from our soon-to-be poker legends".

World Series of Poker® can be downloaded for free on and Google Play.

About World Series of Poker®

WSOP® is the official free to play app of the World Series of Poker®, and the world's most downloaded free poker game. Home to millions of poker players across tablets and mobile, the game features countless exciting game modes, tournaments and special events while rewarding its best players with authentic virtual WSOP® prizes and poker-player trophies and glory.

® Holding Corp (NASDAQ: PLTK) is a mobile gaming entertainment and technology market leader with a portfolio of multiple game titles. Founded in 2010, ® was among the first to offer free-to-play social games on social networks and, shortly after, on mobile platforms. Headquartered in , and guided by a mission to entertain the world through infinite ways to play, ® has offices worldwide and employs over 4,000 employees.

2 According to Data.ai, World Series of Poker® is the world's most popular free-to-play Poker (Casino) game by worldwide downloads from Jan - across iOS and Google Play.